A MESSAGE FROM MOE …

I recently moved into a new house in Asheville and have been opening old boxes of memorabilia long stored away. I discovered this picture from my 25-year career in the Air Force, when I served in Saudi Arabia during Operation Southern Watch. 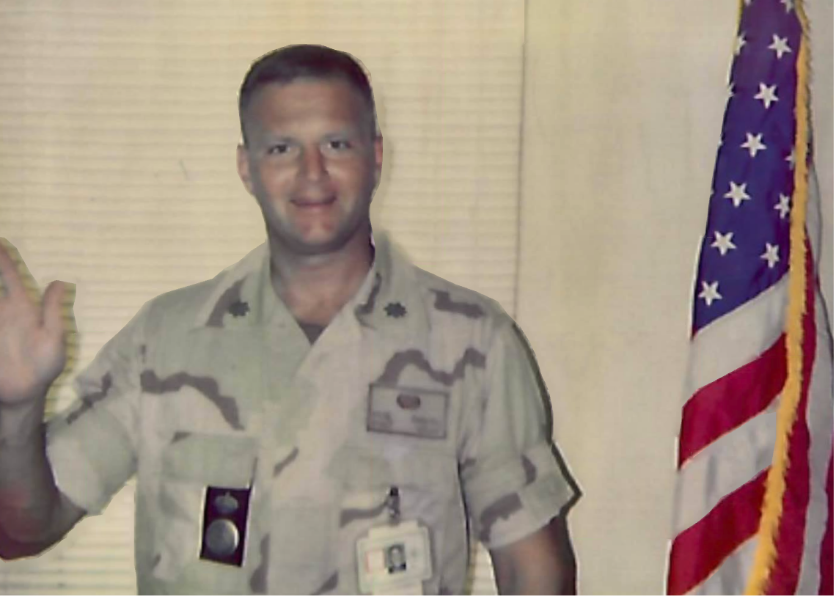 HOW DO THEY COMPARE?

Moe Davis doesn’t have a lot in common with Madison Cawthorn when it comes to policy proposals for Western North Carolina. Here’s a quick glance at what each candidate has said about key issues:

Moe Davis: Supports a public option to ensure that everyone has healthcare coverage, but allows those who prefer to procure their own insurance at their own expense to do so.

Madison Cawthorn: Seeks to allow more insurance companies to compete with Blue Cross and Blue Shield to lower costs. Of course, that will do nothing for those who lost employer-based health insurance. And allowing out-of-state insurance companies would strip away the state’s authority to regulate them, meaning fewer consumer protections.

Moe Davis: Believes it is a global pandemic that threatens our health and our economy, and follows state guidelines on masks and social distancing to protect others.

Madison Cawthorn: Says it’s no different than the flu, that we shouldn’t shut down our economy, and rarely wears a mask or practices social distancing.

Madison Cawthorn: Supports tax incentives for ISPs to get them to expand their networks. (This has been tried for nearly 20 years and has ultimately failed because ISPs won’t invest in expansion to rural areas where they can’t make a profit, even if they are given incentives to do so.)

Moe Davis: Will fight to protect the VA from privatization.

Madison Cawthorn: Supports a president who is seeking to privatize VA healthcare.

JOBS AND A LIVING WAGE

Moe Davis: Attracting jobs to Western North Carolina depends on expanding access to healthcare, adding broadband capability and training students for high tech jobs in green energy and green technology that pay well and will protect our environment. We also must raise the minimum wage to $15 an hour.

Madison Cawthorn: No mention of jobs or wages on his website.

Moe Davis: Believes in science and the need for policies to reverse climate change because it is our moral obligation to preserve and protect our land, air and water for our children and future generations. Will work to extend and expand federal support for commercial and consumer alternative energy programs including wind, solar, geothermal heating and cooling. Supports a return to the Paris Agreement.

Moe Davis: Supports ending qualified immunity so that police officers can be held liable for violating the rights of people they serve. He would push to establish a federal model policing program that creates standards of conduct including de-escalation and the use of non-lethal force. He supports efforts to give back to the Black community to compensate for decades of racist economic policies.

Madison Cawthorn: Called Democrats racists and said reparations are not needed because 600,000 died to free slaves in the Civil War. Offered hydration packs to Asheville police a day after police made international news by destroying a medic station and slashing bottles of water meant for protestors.

“Retired Col. Moe Davis has repeatedly demonstrated that he is unafraid to stand up for what’s right, even when it comes at his own personal and professional expense,’’ Rep. Moulton said. “Over the course of his career in the Air Force and in government service, Davis consistently challenged the status quo and stood up for his principles, and our country is better for it. I look forward to seeing him bring that sense of integrity and moral authority to Washington.’’

“I’m grateful to Representative Seth Moulton and Serve America for their support of my campaign to represent Western North Carolina in Congress,’’ Davis said.  “Like Representative Moulton, I’m proud to be a Veteran and I share his commitment to put service before self and stand up for what’s right even when doing so comes at a cost. I look forward to serving with him in the 117th Congress and working with him to get our country back on the right track. We can and will do better.”

The death toll from COVID-19 continues to rise unabated as our country fails to take the necessary steps that other nations have committed to in order to control the spread of this deadly global pandemic.

Moe posted this video on reaching yet another grim milestone.

STATEMENT ON TROOP WITHDRAWAL IN GERMANY

Donald Trump said, “We don’t want to be responsible anymore” to explain why he’s pulling one-third of U.S. troops — about 12,000 of roughly 36,000 troops — out of Germany. He said Germany hasn’t lived up to its financial commitment to NATO; therefore, he’s cutting our troop presence.

U.S. troops are stationed in Germany and other NATO countries as a forward presence to deter Russian aggression, which is a key strategic interest of the United States … or at least it was until January 20, 2017. Trump acts like our troops are mall cops, and if store owners aren’t ponying up enough to suit him, he’ll pull his rent-a-guards out of the mall and put it at risk in order to shake down the store owners. Whether it’s through ignorance, indifference or to appease his pal Putin, Trump’s actions are feckless and reckless.

At any given point in time, about 1 in 15 of America’s 1.3 million active duty troops are overseas. We have troops in about 150 countries. There are just a few troops in many countries, often at our embassies, and tens of thousands in others where a large forward presence supports our strategic interests. Moe is a firm believer in fiscal responsibility and hasspent most of his adult life involved in military and national security matters. He understands the importance of striking a reasonable balance between spending and security. We need to continually assess where we deploy our military assets and increase or decrease them as appropriate at the time and consistent with our strategic interests. But arbitrarily yanking troops out of Germany to poke them for not paying what Trump believes they owe isn’t just foolish, it’s dangerous.

Our troops deserve a Commander-in-Chief they can trust. America deserves a President who puts America’s national security first. The world deserves an America that is responsible.

We all deserve better than Donald Trump.

Mission Hospital Nurses — Moe Davis stands with you. The decision to unionize is your decision to make. Thank you for all you do for Western North Carolina. 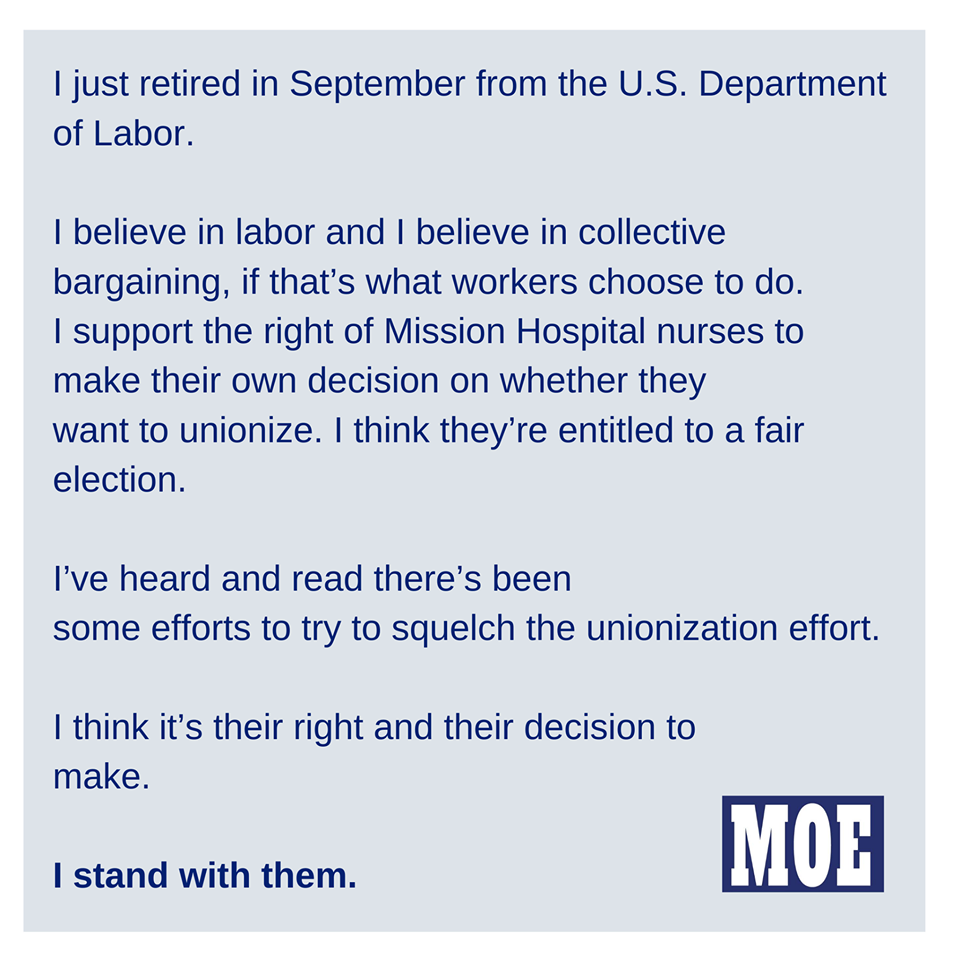 APPLY FOR AN ABSENTEE BALLOT

Concerned about voting in the age of the coronavirus? You can protect yourself and still exercise your right to vote using an absentee ballot, a method we are urging voters to choose this election cycle. You can go to this link for an application. Bear in mind there could be changes to the absentee ballot application. We’ll keep you updated.

Voters have until Oct. 27 to request an absentee ballot, but we would recommend you apply now and vote early so that the State Board of Elections isn’t inundated at the last minute and there isn’t any delay in getting the ballot back in time.

Reminder, you don’t have to vote by absentee ballot if you apply. But it is a great back-up if there are any disruptions and a reduction in polling locations due to the pandemic. Keep in mind that even if you apply now, you won’t actually receive an absentee ballot until September.

EXPERIENCE ISN’T ALL THAT MATTERS

We’ve said it before: Experience matters. But unfortunately, money matters, too. We need to increase our fundraising so that we can get the message out about Moe Davis’s experience.

Help us spread the word. Donate.